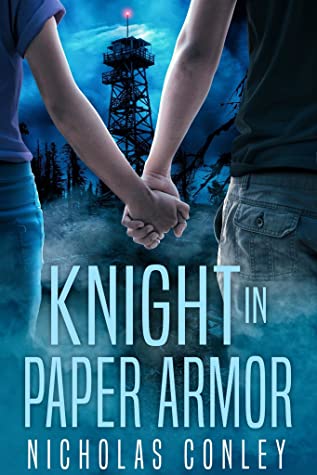 I completed this book back at the end of November but took a while to get around to its review. Before we jump into it though…

2020 was challenging (to say the least) for nearly everyone in the world. Everyone had a battle of their own to fight. Many people also had the chance to grow and invite positive changes. Here’s hoping and wishing and praying that 2021 brings more positivity, and fewer battles. Wish you a Happy New Year!

Let’s jump right into the review.

I received a free copy of this novel from the author in exchange for an honest review. Nicholas Conley’s Knight in Paper Armor had an interesting blurb, even though it was quite different than the books I normally pick up. It has its ups and downs, but is definitely a good read that should be on your TBR pile.

Thorne Century is a mega-corporation that has its fingers in every industry in the United States of the near future. It influences politics, the economy, and the life of nearly every person living in the new American society, where one part seems to be thriving on capitalism and the other seems to be tearing at the seams as a result of systemic racism, discrimination, poverty, and exploitation of immigrants. In the midst of it all is Billy Jakobek, a child whose psychic abilities result in him being raised in Thorne laboratories as a source of cutting edge medical advancement. His latest relocation brings him to Heaven’s Hole, a town built around a Thorne Century factory, where almost every person in the town works, under unsafe, exhausting, and exploitative conditions. Natalia Gonzalez is the daughter of Guatemalan immigrants, who lives with her grandmother, two younger brothers, and mother who works in the factory. Natalia, like Billy, wants to escape her reality. But both are held back – Natalia by the family she cannot think of leaving behind, and Billy by his desire to help people, even if it means becoming an experiment for Thorne Century. When Billy and Natalia meet, they find a connection with each other unlike anything else. Yet, their bond is threatened not only by Thorne Century, but by Billy’s powers that he is yet to gain control over, and by Billy’s ties to an uncontrollable and inexplicable force called the Shape, which prophecizes the end of the world – beginning at the Thorne factory… and brought forth by Billy himself. Will Billy remain the kind-hearted boy who helps others, or will his powers unleash the wrath they’re capable of?

7 out of 10. I found it a little difficult to satisfactorily categorize Knight in Paper Armor as dystopian or sci-fi; it had a very strong YA vibe to it too.

Nicholas Conley paints a picture of a dystopian future where racism, segregation, and discrimination are rampant, and where society (and even geography) is shaped by people in power who use these very concepts as weapons, while everyone else can do little but acquiesce. At times, it is easy to believe that this setting is exaggerated – that it could never get that bad. But at times, shown through reasoning and ideologies that we can easily see even today, the setting sometimes come across as a very real, potential eventuality. Scary, yet eye-opening, this added quite a dark element of reality to the entire story.

Characterization. It’s not easy to evoke empathy for the bad guy and support for a good guy who is not always ‘good’. But Nicholas Conley manages to weave intricate back-stories for all the primary and secondary characters, making it really easy to become vested in their story arcs.

Although intriguing, the story did seem to drag in a few places. I also found the dialog to be a bit unsettling, with characters sounding way older than they were shown to be. The reasoning, as I understood it, was that these characters have been through enough to seem a lot older than their actual ages. In itself, that explained why they spoke and behaved the way they did. But then they would occasionally behave extremely teenage-d in their thoughts, and that mismatch did come across as a little off.

Anyone who enjoys dystopian novels, including YA dystopian, as well as slightly abstract stories or those with a touch of the metaphysical.

Anyone who cannot digest violence or gore. There is a significant amount of really violent stuff that is presented, through Nicholas Conley’s talents, in a very vivid manner.

A gritty, engaging tale that touches upon social and even existential issues, and that, at its heart, talks about the good and bad within all of us and the choices we have.

If you have read Knight in Paper Armor, tell us what you thought of it in the comments below. Or recommend other dystopian novels that you’ve enjoyed! As always, thanks for stopping by and reading my review.