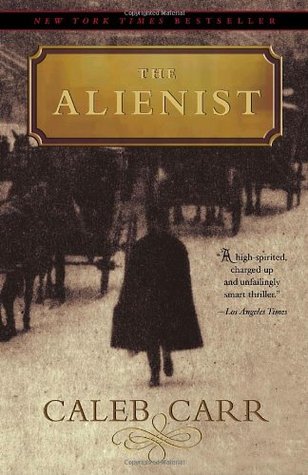 I first heard of The Alienist when I saw its trailer on Netflix. I was very intrigued, and then I found out that it was based on a book by Caleb Carr. And like any regular bookworm, I insisted on reading the book before I watched the series.

(To whom did I insist, you ask? Well… myself. I doubt this decision would ever be that important to anyone but me.) But… I digress.

What did I expect going into the book? Something along the lines of Criminal Minds, but set in the late 19th century.

What did I get? Read on to know.

Journalist John Moore is uniquely open-minded and aware of society compared to his peers who choose to outright ignore the existence of anything and anyone considered different from the norm. Which is why when the body of an adolescent boy, who is known to be from one of the city’s prostitution houses, turns up horribly mutilated and murdered, no one really cares. No one but John Moore and Dr. Laszlo Kreizler. An ‘alienist’, Kreizler is infamous for his non-conforming views on abnormal psychology. With support from one of the few non-corrupt officials in power in the police department, Kreizler and Moore team up with others who share both, a curiosity of the human mind and a belief that everyone deserves justice. They begin their work to find and apprehend a killer in secrecy, even as his murders become more violent and the bodies, more public. But not everyone wants to see them succeed. And the ragtag team find themselves targeted by the many people, dignified and unsavory, looking for power in New York and willing to manipulate society for their goals. Will Kreizler and his team find out who is behind the atrocities committed against the growing number of adolescent boys? Or will the pursuit of justice and knowledge cost them too high a price?

9 out of 10 for its mystery and period setting narrative

Yes. This is Book #1 featuring Dr. Laszlo Kreizler. The second one is Angel of Darkness.

The characterization. Each and every character holds their own, while also working perfectly with each other. Nothing they do seems out of the ordinary in their arcs, and the way they build strategies, thoughts, and actions off of one another makes it very easy to believe that this is an actual team working together.

The Alienist delves into psychiatry and psychology before these two fields were commonly known and accepted. It goes into criminology and abnormal psychology in a manner that was even frowned upon in the period of its setting. And it does justice to the attempt of being the story of how these practices started. The evolution of the schools of thought has been shown really well, with the depth that the book gets into being enlightening.

The book also touches upon some hard hitting realities of the time it is set in, including a lack of equality, racism, ignorance of real social issues, a complete and deliberate disregard of anything that was separate from what was considered ‘ordinary’. It genuinely seems strange that there was a time when people could be so willfully ignorant, but that time did exist. That is one of the problems that the story does take into account, showing the reader the impact of such blindness on society, as well as on individuals. It also acts as a reminder that we’ve come a long way, and offers hope that the future will be even better.

While the depth of the book is one of its best qualities, it also is one of its most frustrating qualities. The depth in the psychology aspect is great, but there is also a lot of detail about the layout of the city, its landscape, its roads, and its transportation. I did realize that that was to give the reader a feel for the setting, and it did work to some extent. But at some point, if you’re not from New York, you’re not going to care all that much about the sheer amount of detail in the streets’ setup. I felt like maybe that part could have been cut down by about 20%, just to make it slightly lighter.

If you like psychological thrillers that delve into criminal profiling and abnormal psychology, you will like The Alienist. It also pulls you into its setting, so if you’re a fan of historical stories (especially historical crime fiction), you’ll definitely enjoy this book.

Anyone who is easily put off by gory details – there is significant carnage in The Alienist.

A glimpse into the history that laid the foundation for the schools of thought, and books and movies of modern psychiatry and criminal/abnormal psychology.

As always, thank you for taking the time to stop by and read my review. 🙂 Coming up next, a review of The Girl on the Train – Paula Hawkins’ bestseller!