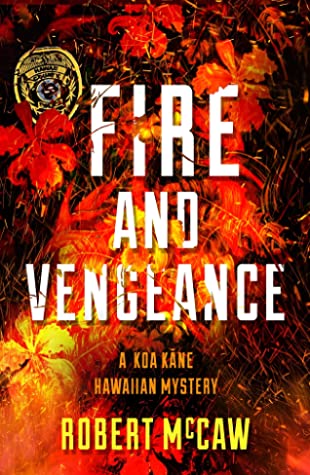 Thanks to NetGalley for an ARC of Fire and Vengeance by Robert McCaw. It was an interesting read, which had its highs and lows. Read on to know more!

A volcanic vent erupts in the town of Hilo, Hawai’i, killing children and teachers when it causes the explosion of the school that was built on the mountain. The chief architect and contractor of the school are murdered within hours of the event. Chief Detective Koa Kane is called in to investigate whether the explosion and deaths were the result of natural calamity or intentional negligence. As the case heats up, Koa receives news that his estranged and imprisoned brother collapsed in prison and has been diagnosed with a brain tumor.

Chief Detective Koa Kane’s personal and professional lives clash when he’s forced into attempting a risky plan to free his brother. His principles are compromised even as he begins to unravel the mystery behind the explosion, a mystery that goes back forty years. Can Koa save his brother and still pursue justice for the murder of innocent children? Or will his own demons bring about his downfall?

Yes. This is Book 3 of the Koa Kane series. While I don’t know if it held spoilers for Books 1 and 2, I can say without a doubt that it was perfect as a standalone too. Book 1 in the series is titled Death of a Messenger and Book 2 is Off the Grid. Both sound interesting and might make for great mystery reads.

Koa Kane himself. As a man who continues to deal with demons, personal and professional, that show him the worst of the world, he still fights to do what is right. Sometimes forced into feeling hopeless for his desire to remain ethical and moral in a world where those very qualities are taken advantage of, Koa comes across as a likable character that you can easily associate with and want to root for. That made every defeat and victory he faced personal to the reader.

The book took some really unexpected turns, turning a story that could have been very one-dimensional into a much more intricate, woven tale of mystery and suspense.

The Hawaiian culture references were really interesting too. Not only did it set the stage for the story to unfold, but also added a lot of depth to the characters, what drives them, and how those nuances influence their reactions and actions.

On multiple occasions, I found myself a little confused with the characters. There were a lot of them, and many shared similar names or were simply called by different names at various points, that made it a little tough to follow who was who.

Anyone who is interested in a good suspense and those who like to explore other cultures. Fire and Vengeance has a good helping of both.

I don’t think anyone would actively dislike Fire and Vengeance, unless of course, you absolutely hate msytery and suspense novels.

The Hawaiian culture references, a complex and very real protagonist, and an intricate plotline.

Fire and Vengeance by Robert McCaw released on 26 May 2020. You can get a copy on Amazon here. While I wouldn’t say that the book turned McCaw into an author I’d diligently follow, I will definitely be reading more of his work, given the chance, probably starting with Off the Grid.

As always, thanks for dropping by and taking the time out to read this review.

3 thoughts on “Some highs, some lows, but a hit overall: A Review of Fire and Vengeance by Robert McCaw”